Rep. Lee Hewitt: More oil has been spilled from offshore drilling than exists off the Atlantic Coast 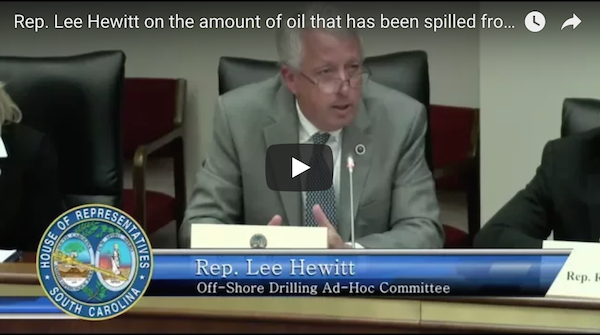 Last week Rep. Lee Hewitt was in Columbia for the second meeting of the House Offshore Drilling Ad Hoc Committee.

In this committee video, Lee points out to drilling advocate Bonnie Loomis of the American Petroleum Institute that 5.1 billion barrels of oil have been spilled from offshore drilling, an amount that exceeds the estimate of oil off the Atlantic Coast.

The coast of S.C. cannot afford to risk harming its economy and environment by effectively playing Russian roulette with offshore oil rigs. Sooner or later the coast will catch a bullet in the form of a major oil spill disaster.