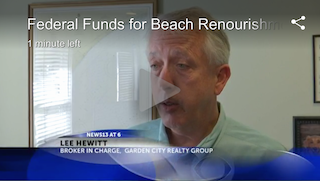 “Grand Strand beaches may get help with beach renourishment sooner than expected. Congress approved a federal budget package on Friday and money has been set aside to put more sand on the shore.

…’I’m excited that congress realized the importance of that,’ said Lee Hewitt, the broker in charge at Garden City Realty Group.

Hewitt says the group manages more than 450 area rental properties and, ‘without good beaches, without quality beaches our tourists would go elsewhere.’

Rain, wind, and floods have stripped away lots of sand, and Hewitt worries that less space on the shore could hurt tourism.

‘It goes back to jobs, and us being able to say we’ve got a good healthy beach. Without that they’re not going to want to come which then effects jobs,’ said Hewitt.

Congressman Rice added, ‘the Grand Strand is the number one tourism driver in the state of South Carolina. I think 40 -50% of tourism dollars come from the Grand Strand.’

All the more reason Hewitt says erosion needs to be dealt with sooner rather than later, ‘its vital that the renourishment be done as quickly as possible.’”