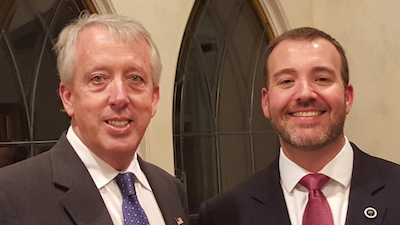 In the month of September, Georgetown and Horry counties faced a disaster on two fronts. First, as Hurricane Florence slowly moved toward the coast we faced a strengthening category four storm. Then, as it moved ashore in North Carolina, we watched the storm stall and dump up to 17 inches of rain into the watershed that drains into rivers that feed into Winyah Bay.

Both of these scenarios required the local Emergency Operations Centers to call for evacuations of the affected areas. Luckily, we were spared damage from the land fall of Florence. However, we were not so lucky from the affects of the rainfall. The flooding caused closure of Highways 501, 22 and 9 in Horry County and aqua dams were installed on Highways 17 and 521 in Georgetown County as the Dept. of Natural Resources flood modeling projected these roads would become impassable as well. If Hwy 17 had become inundated with flood waters as predicted this would have been a nightmare situation for both counties, with the Grand Strand and particularly the Waccamaw Neck becoming inaccessible islands.

As we look back and review the outcome, it’s obvious the proposed Southern Evacuation Lifeline Highway (SELL) must become a priority for the safety of our residents and visitors. This proposed 28-mile limited access highway connecting Hwy 31 with U.S. 378 would vastly improve access across the Waccamaw River between Conway and Georgetown, providing a needed additional transportation corridor in the event other vital roadways became flooded and impassable.

Studies by the S.C. Dept. of Transportation and the Myrtle Beach Chamber of Commerce show the SELL project will reduce traffic congestion, improve road network efficiency and significantly expedite hurricane evacuations, particularly for Georgetown County, and now it’s clear the project would also improve safety in the event of flooding.

Planning for this important road began in 2003 and a feasibility study was completed in 2009. Currently, Horry County has allocated $25 million for the final environmental impact study, road design and right-of-way acquisition. This is a drop in the bucket compared to the estimated $600 million price tag. While there are many road improvements that are important and needed in our area, we call on our Congressional delegation to help us find funding for this very important evacuation route.

Recently, Gov. Henry McMaster issued an executive order creating the S.C. Floodwater Commission, which we applaud. This commission is tasked with identifying potential short and long-term mitigation solutions for low lying and coastal areas along the state’s rivers. We ask this commission to address a flawed FEMA home buyout program that bars many hard-working families impacted by flooding from qualifying for the mitigation program. We also ask for additional funding to improve the accuracy of the DNR flood modeling, which was flawed, particularly for Georgetown County. It is vital that local Emergency Operation Centers and the residents of affected areas have the best possible information to plan for a flood event.

It is important that we begin to address these critical needs as soon as possible to ensure the safety of our residents and visitors.

Sen. Goldfinch and Rep. Hewitt live in Murrells Inlet and represent Districts 34 and 108 respectively in the SC General Assembly.