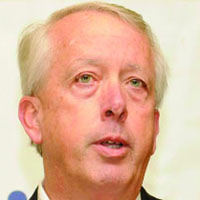 Offshore drilling is making waves at the State House.

Last week the House Agriculture, Natural Resources and Environmental Affairs Committee created an ad hoc group to research and study whether or not offshore drilling and seismic testing is right for South Carolina.

“It’s more of a task force than a committee,” state Rep. Lee Hewitt said. He was appointed to the group last week, and is the only representative from a coastal district.

“I’ve been clear in my opposition to offshore drilling off our coast based on what I’ve heard from my constituents, particularly the municipalities I represent,” he said. “I look forward to bringing this perspective to the committee to ensure our coast is protected from a drilling disaster.”

Since the group is new, it will likely not meet until late summer or early fall, and Hewitt is speculative about what the committee will study. “The way it was explained to us was that South Carolina has kind of been told that within the next five years there’s going to be a bull’s-eye on this area and on this subject and that we just need to start exploring and studying it,” Hewitt said. “And trying to do the best we can to protect South Carolina.”

The state’s territorial rights over the ocean extend approximately 3 nautical miles offshore, as measured at mean low tide. The federal government owns mile 3 to mile 200 and has jurisdiction to determine whether or not to lease the area for exploration and drilling.

In 2015, state Department of Health and Environmental Control made an agreement with the federal Bureau of Ocean Energy Management, part of the Department of the Interior, to grant restricted seismic testing permits to applicants. The agreement was reached without a public hearing, prompting a challenge from the Coastal Conservation League, the S.C. Wildlife Federation and others. The decision was appealed to the DHEC board, but they supported the staff’s decision, Hewitt said.

One permit for testing, submitted by Spectrum GEO, was approved at the state level.

Hewitt was a member of the DHEC board in 2015. “Basically a compromise was reached,” he said. “The feeling was that having a restricted permit was better than having an unrestricted permit.”

The agreement happened in the midst of the Obama administration’s review of the South Atlantic region. South Carolina was not included as part of the administration’s protected coastline, but it did later deny six permits for drilling. Current Secretary of the Interior Ryan Zinke stated he is reviewing the area for the 2017-2022 Outer Continental Shelf program. That action could put the BOEM-DHEC agreement back in play.

The agreement restricts seismic testing from being conducted in water shallower than 98 feet, less than 40 miles off the coast, between April-September due to sea turtle nesting season, and in designated Marine Protected Areas.

Hewitt’s district extends from Murrells Inlet to Dewees Island in Charleston County. He has some ideas about what legislators can do to serve constituents on this issue even if the drilling is out of their hands. “There are other things in the actual drilling that could possibly affect South Carolina,” he said. “The support services and everything that’s needed to support the industry, whatever rules and regulations. I would assume those ideas would be brought up and areas of concern that we need to be looking at.”