Last week I had the privilege of being front and center in the spotlight on the House floor. I spoke twice from the House well.

On Tuesday, I spoke from the well about H. 3856, a resolution I cosponsored to oppose private ownership of our offshore fisheries through what is called “catch shares,” which would severely restrict access to fishery resources, hurting fishermen and our fishing communities. The House unanimously passed the resolution and forwarded it immediately to federal fishery regulators.

I believe the House resolution was instrumental on Wednesday in getting a pilot catch share proposal withdrawn from consideration by fishery regulators. 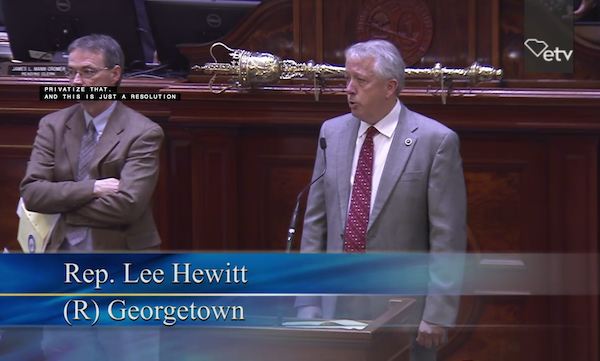 On Wednesday, I had the pleasure of introducing the Georgetown County Chamber of Commerce’s 25th Leadership Georgetown class to the House from the well. I also had a chance to meet with the class and chamber President and CEO Beth Stedman and talk about issues over dinner in Columbia. It was great to be with these up and coming county leaders.

The issue of plastic bag regulation by cities and counties came to the House floor last week in the form of the “plastic bag” bill, H. 3529, which would have prohibited cities and counties from enacting ordinances restricting or banning the use of the bags. The bill is in response to Folly Beach and the Isle of Palms adopting such ordinances.

In a close 50-49 vote, debate was ended on the bill, effectively killing it for this year. I voted to kill the bill, because I think home rule is important for cities and counties – they should have the right to regulate plastic bags if they so choose.

On Tuesday, I voted for a bill aimed at improving moped safety, which passed on a 75-29 vote. The bill requires moped drivers to either have a valid driver’s license or a separate moped exclusive license, wear a reflective vest at night and a helmet if they are under 21 and it applies drunken driving laws to mopeds.

This week the budget bill hits the House floor for debate, which should make for long legislative days and an interesting week.

I hope this information is helpful. Please let me know if I can be of assistance.