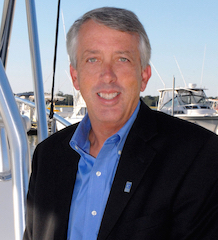 Backed by a plethora of movers and shakers from Georgetown County, on Nov. 9, Lee Hewitt announced his plans to run for the S.C. House of Representatives seat from District 108.

While he announced his first run for public office in a news release, he said that, since the release was posted online, he has been receiving emails of support, requests to volunteer and campaign funds.

His first business, he said, was to head south to McClellanville and the Mount Pleasant area, where he’s not as familiar a face as he is in Murrells Inlet, the Waccamaw Neck and Georgetown.

Hewitt, 55, an owner of Garden City Realty, said he intends to bring a small-business focus to Columbia. “I think about these issues every day – roads, schools, jobs, the environment,” he said. “I make my living from people who come here for the pristine beaches. My son is in school here. I have another son graduating from college, and I want him to be able to come back home and make a living.”

While the run for the House seat is Hewitt’s first, he is no stranger to public service. He was appointed by Gov. Nikki Haley to serve as the 7th Congressional District’s representative on the Department of Health and Environmental Control and has served as chairman of the Georgetown County Planning Commission, on the Board of Zoning Appeals and the Georgetown County Comprehensive Land Use Plan Committee. He was a member of the Grand Strand Area Transportation Committee and the Southern Evacuation Lifeline Road Task Force.

That familiarity has brought him support from current and past members of Georgetown County Council, including Councilmen Austin Beard, Steve Goggans and John Thomas, as well as former councilmen Glen O’Connell, Jerry Oakley, David Hood and Bob Anderson. Other supporters include restaurateurs Al Hitchcock of Drunken Jack’s, Charlie Campbell of the Dead Dog Saloon and Kelly and Dexter Dorman, owners of Lee’s Inlet Kitchen.

Hewitt and his wife, Whitney, live in Murrells Inlet.

No other candidate has announced plans to run for the seat. State Rep. Stephen Goldfinch, who holds the seat, has announced his intention to seek a state Senate seat.