Child luring is not a crime in South Carolina after multiple
attempts reported in Mt. Pleasant and City of Charleston 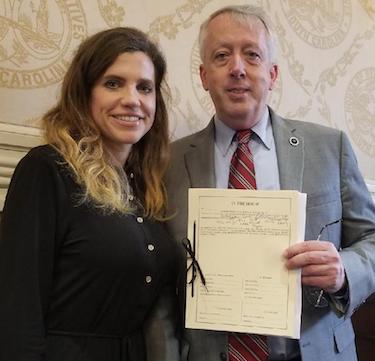 MT. PLEASANT, S.C. – Two lowcountry legislators refiled a bill Tuesday that would make it illegal to attempt to lure a child into a vehicle after multiple attempts to lure children were recently reported in Mt. Pleasant and City of Charleston. South Carolina has no law that makes child luring a crime.

Reps. Lee Hewitt, R-Georgetown and Nancy Mace, R-Charleston, refiled a bill they introduced in the last legislative session in response to multiple attempts of child luring in Mt. Pleasant and Charleston. Residents may recall a publicized event in October of 2017 when an individual attempted to lure multiple children into a van using a puppy.

“Rep. Mace and I are one hundred percent committed to seeing this bill pass, giving law enforcement officers the tools they badly need to arrest these creeps who would do harm to our children,” Hewitt said. “The legislature must make this issue a priority. Children are at risk.”

“As a mother, it is mind blowing to me that the state of South Carolina hasn’t given law enforcement the tools necessary to arrest individuals who would attempt to lure a child away,” Mace stated. “After multiple attempts just in this last year alone, two in Mt. Pleasant and one on the Charleston peninsula, this legislation should be our number one priority when it comes to crimes against children.”

In October, Mt. Pleasant police reported a man in a U-Haul pick-up truck attempted to lure children into the truck with a bucket of gum. The man was stopped by police, but law enforcement was unable to charge him with a crime.

“We thank Representatives Hewitt and Mace for representing Mount Pleasant so well in the legislature and for introducing this bill. Our town council looked into this matter after several local incidents raised public awareness and we back our fine law enforcement professionals in recommending passage of this bill in order to protect our children,” Mayor Haynie said.

The state House will take up the bill when the session starts January 8th.