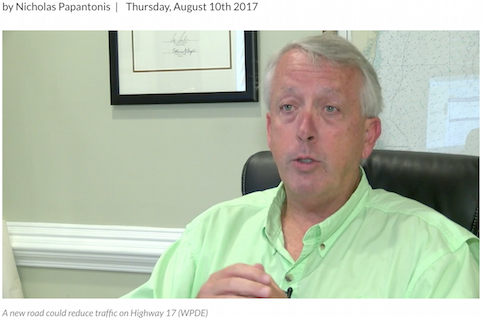 A long-shelved plan to give South Strand residents more options during emergency evacuations could get a place on the government's priority list, if State Representative Lee Hewitt gets his way.

The Southern Evacuation Life Line, a project listed in the Grand Strand Area Transportation Study's (GSATS) 2040 Plan, would connect Highway 31 to Highway 378 west of Conway. As a limited access road, it would be designed to move people from the Waccamaw Neck area inland quickly, while decreasing congestion on Highways 17 and 501.

"As we're trying to get people out of the area to safety in case of a hurricane evacuation, and the only route is Highway 17 through the Waccamaw Neck, it could easily be congested or come to a standstill by one accident," Hewitt explained.

Hewitt said the project was originally shelved after funding for it was given to another project. He wants to see it built sooner, as the population of the Grand Strand continues to increase.

"If we could find a way to get that traffic off the Waccamaw Neck and around Georgetown, that would alleviate a lot of trouble," Hewitt said.

The project is opposed by environmental groups, saying it would increase traffic and destroy wildlife habitats.

But several people in Murrells Inlet said they support the project.

"There's nothing but positive as far as I'm concerned, putting another evacuation route through the town," Ryan Newman said.